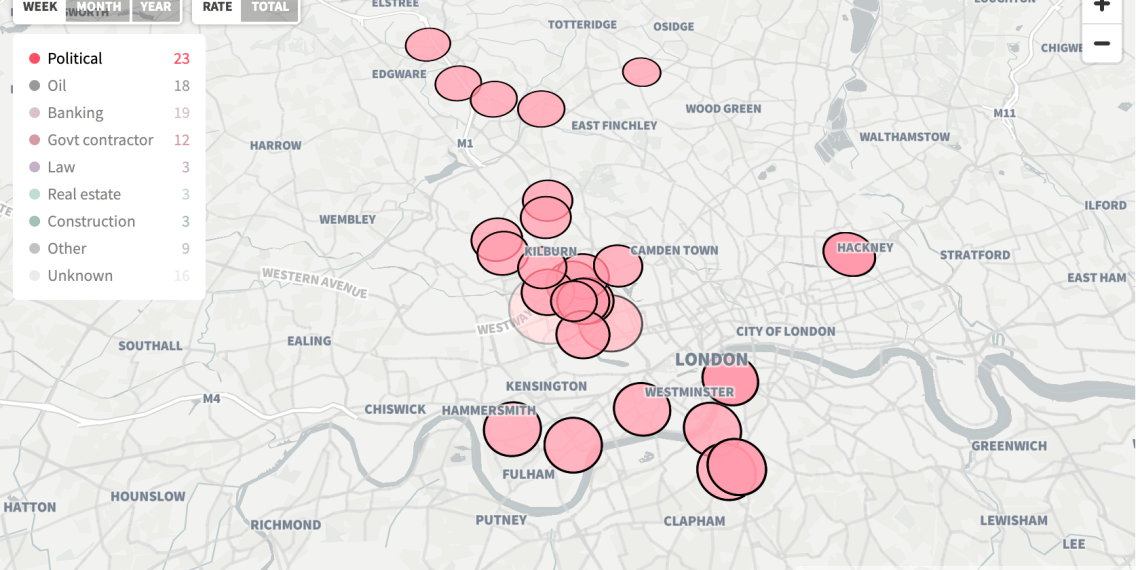 In the last three decades, at least 233 properties were bought by 166 offshore companies with a combined worth today of £350 million. Behind these companies were 137 influential Nigerians

HIGHLIGHTS OF FINDINGS ON PROPERTIES:

The interactive visualisation, produced using data leaked in the Pandora Papers and other similar investigations, offers a further indication that there was a mushrooming of UK property purchases by Nigerian-owned offshore companies.

In the last three decades at least 233 houses and apartments were bought by 166 such companies with a combined worth today of £350 million.

Behind these companies were 137 wealthy and influential Nigerians, according to an investigation by Finance Uncovered and Premium Times.

The bulk of purchases happened between 2010 and 2015 when Goodluck Jonathan was president of Nigeria. Jonathan’s government has been accused of allowing corruption to run rampant. Goodluck Jonathan has always strongly defended his record in office and denied any wrongdoing.https://flo.uri.sh/story/999837/embed?auto=1A Flourish data visualization

The Pandora Papers is a massive leak from firms that specialise in setting up offshore companies in territories such as the British Virgin Islands and Panama. The leaked documents have allowed journalists from all over the world to lift the corporate veil and reveal the companies’ true owners. The project was organised and led by the International Consortium of Investigative Journalists (ICIJ).

It is not against the law to secretly buy British properties using anonymous offshore companies. Finance Uncovered has seen no evidence in the Pandora Papers that money used to buy houses or apartments in the UK represents the proceeds of corruption or other criminality.

Indeed, many specialist advisers have routinely recommended clients invest in this manner to legally avoid tax.

Journalists from the BBC, The Guardian and Finance Uncovered spent months matching the names of company owners found in the Pandora Papers with UK Land Registry records to discover who really bought hundreds of UK properties.

In addition, Finance Uncovered then teamed up with PREMIUM TIMES to apply a similar analysis to previous data leaks, including the Panama Papers and FinCEN FIles.

The result is the most comprehensive dataset ever published focusing on rich and powerful Nigerians who have secretly bought UK property.

Stella Oduah and her properties

The property owners include Nigeria’s former aviation minister Stella Oduah. Now 59, she served under ex-President Goodluck Jonathan from 2011 until 2014 when she resigned amid serious corruption allegations, which she has denied.

Ms Oduah was never charged on those allegations. But she has since been indicted on separate money laundering offences relating to alleged fraud. Ms Oduah, who remains a senator, has always denied accusations of wrongdoing.

We have seen a confidential US suspicious activity report by Deutsche Bank. It suggested that a company owned by Ms Oduah made a suspicious payment of almost $72,000 to a London property broker in 2012.

A search of Land Registry records then showed that one month later another company, registered in Seychelles paid £5.3 million for a London townhouse.

The Seychelles company shared a name with another one owned by the Oduah family.ⓘ

The Deutsche Bank suspicious activity report is part of the FinCEN Files, a leak of documents obtained by BuzzFeed News and shared with other journalists through the ICIJ.

It is not known whether any further action was taken as a result of the suspicious activity report.

Mohammed Bello-Koko and his properties

Another prominent figure whose London property appears in the data is Mohammed Bello-Koko, 52, the finance director of the powerful Nigerian Ports Authority, and reportedly, also, its acting managing director.

For much of his career, he worked in banking, working for 10 years at Zenith Bank, where he rose to be a deputy general manager.

According to the Pandora Papers, Bello-Koko and his wife were the anonymous owners behind two companies incorporated in the BVI.

https://projects.icij.org/investigations/pandora-papers/secrecy-brokers/en/aleman-cordero-galindo-lee?header=false?header=true
Searches at the Land Registry showed that these companies bought five London properties between 2009 and 2017, for a combined total of almost £1.5 million. One of the properties has since been sold.

Elsewhere in the Pandora Papers, a 2017 letter from law enforcement officials in the BVI requested information about these BVI companies — together with seven other companies — in relation to an investigation into financial offences, including money laundering.

Alemán, Cordero, Galindo & Lee (Alcogal), the BVI registered agent for the companies, wrote back saying: “To the best of our knowledge, these companies do not have any assets or bank accounts held in their name.”

Asked why it had not mentioned the UK properties, Alcogal explained that it was only obliged to provide law enforcement officials with the information that it holds in its records.

Finance Uncovered and Premium Times wrote to Mr Bello-Koko and his wife but they did not respond.

We have seen no evidence that law enforcement enquiries in the BVI led to further action against Mr Bello-Koko, his wife or their property-owning companies.

Lanre Suraju, chair of Human and Environmental Development Agenda (Heda Resources Centre), a Nigerian anti-corruption campaign group said: “For a country that is incapable of providing electricity and decent roads without external financial support, and which depends on a combination of foreign loans and aid to supply potable water and public education, it is galling to discover such a humongous outflow of Nigeria capital to London, all concealed via the use of offshore companies. “

For more than five years, under three different Conservative Party prime ministers, the British government has been promising to make the names of offshore property owners public as part of wider efforts to end anonymous ownership. But it has failed to do so.

Rachel Davies Teka, head of advocacy at Transparency International, said: “This investigation shows it remains all too easy for those with suspicious wealth to acquire property in the UK whilst hiding their identities using opaque offshore companies. Not only does this harm the countries where suspect funds are siphoned from, but it damages Britain’s reputation as a hub for global commerce.”